It is important to note that being LGBTQ+ does not cause these issues, but it can be down to having to face things like homophobia, biphobia, transphobia, stigma and discriminations, social exclusion, and rejection.

An effective mental and physical wellbeing strategy needs to consider the different wellbeing factor is that affect various members of the society, meaning one needs to be aware of the challenges LGBTQ+ people face. This can be counter acted by promoting education and awareness about diversity and mental health inequality through communication strategies and training of diversity and inclusivity, giving a safe space and environment to express feelings and concerns, declaring your pronouns, and reaching out to LGBTQ+ communities for their evolvement.

The most common barriers include lack of support from family and friends, in the 1950s and 60s many mental health professionals held the belief that homosexuality and bisexuality was a mental illness. Individuals of the LGBTQ+ community were subjected to treatment against their will, including being hospitalized against their own will, aversion therapy and electroshock therapy.  Even today there are still members of the community who still face discrimination and unequal treatment due to lack of knowledge, training and understanding.

Why is there an LGBTQ+ History month you may wonder? Well, despite having a more accepting society, a lot of laws and views that were prohibiting LGBTQ+ equality were only changed in recent years. For example, in the UK from the 1980s to 2003 the “promotion of homosexuality” in schools was a criminal offence. Also, it was only in 2014 when same sex marriage was legalised.

Despite these changes, you still have people who don’t accept the LGBTQ+ community. LGBTQ+ History month is important for that very reason, as the community are still facing the same prejudices and obstacles. They may not be the exact same issues as marriage being illegal, yet the issues are still present.

LGBTQ+ History month is a time to reflect on these past events and laws to see how far society has changed for the better. Yet, it also allows us to recognise how LGBTQ+ people are still far away from achieving equality. It also highlights why support systems for LGBTQ+ people are still needed today. For example, there is research on minority groups such as LGBTQ+ and BAME communities. It was found they are at a higher risk of developing mental health issues. They are also more likely to have a lower standard of care. This shows more needs to be done to support the LGBTQ+ community in many aspects of life including health care, jobs. This is why LGBTQ+ History month is important as it also brings about awareness of issues faced and in the past.

LGBTQ+ History month is for all. From members of the community, Ally’s and those who know nothing about LGBTQ+ History. It Celebrates LGBTQ+ role models and their achievements. It spreads awareness of different identities both to do with gender and sexual identity. It also helps people reflect on the past. This all allows us to recognise why support for LGBTQ+ people are still needed today.

Heterosexual: sexually attracted to people of the opposite sex.

Homosexual: Sexually attracted to people of one’s own sex typically.

Cisgender: a person’s identity and gender matches what they were assigned at birth. For example, you were born as a female and still identify as a female.

Being Gay is OK

Families and Friends of Lesbians and Gays (FFLAG)

The miseducation of Cameron Post by Emily M. Danforth

Felix ever after by Karen Callender

The Death and Life of Marsha P. Johnson

The Way He Looks

Orange is the New Black 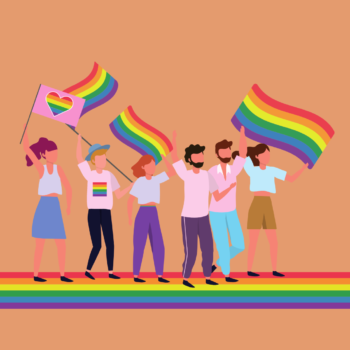